Tientsin, Ford of Heaven, the hometown of George and Philo Cox. 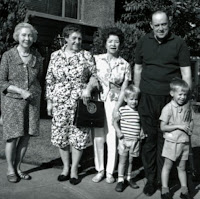 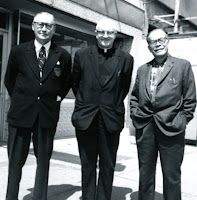 Perhaps a little more should be said about George Cox, the Weihsien prison camp tinsmith, who figured in the closing paragraph of my June 30 posting.

He was the ever popular George Edward Cox, born and raised in Tientsin, graduate of St Louis College, secretary at Credit Foncier de l'Extreme Orient, and serving with the Tientsin Volunteer Defence Corps at the time of Pearl Harbor.

He would be the first to acknowledge that he was outshone by his wife, Philomena Splingaerd who was granddaughter of Paul Splingaerd the most highly honoured foreigner in China during the Ching Dynasty, a Belgian raised to the ninth level of Mandarin as decreed by the Imperial Court. And recognized no less by his native country, he was knighted by His Majesty King Leopold II. (See The Belgian Mandarin, Paul Splingaerd, by Anne Splingaerd Megowan, herself a direct descendant, at http://www.xlibris.com/TheBelgianMandarin.html )

After the war, George and Philomena and son Kenneth and daughter Angela (born in Weihsien camp where my mother was appointed her godmother) settled in Vancouver, BC, Canada. In 1966, George entertained two well-known Weihsien ex-internees, Rev Father Raymond de Jaegher and Dr Guy Chan.

In the upper left photo, George is on the left, Fr de Jaegher in the centre, and Dr Chan on the right.

All through internment, Fr de Jaegher maintained contact with Chinese villagers and through them the guerilla forces operating in the vicinity. And it was also he who masterminded the escape of Tipton and Hummel in 1944. Following liberation, he authored the rare work on the Red take-over in China, The Enemy Within.

Dr Guy H Chan, a Canadian, was a highly regarded medical doctor in the camp. Imprisoned with him were his wife, May, a nurse, and their two sons, Guy and Eugene. Guy the younger, who also went into medicine, became Dr Guy Hugh Chan, opthalmologist in Philadelphia, PA.

The photo on the upper right was taken on the happy occasion when one of Philomena Cox's bosom friends from Tientsin, Grace Lambert, paid her a vist. Grace was on an extended holiday staying with her son Desmond and family in West Vancouver. From the left in the photo are Mrs Borioni (a close Tientsin friend of both Philo and Grace), Grace, Philo, and Desmond with his sons Jeremy and Timothy.
Posted by Tientsin Old China Hand at 8:37 AM